Standing at the arrivals at the airport I am looking around holding a paper in my hand with ‘MARCELL’ written on it. Making sure the sign is visible, I am getting impatient – it takes more than forty-five minutes already and I don’t know what this Marcell looks like. Suddenly I almost get hit by a trolly with three suit cases on top, and a woman behind it calling: ‘Are you Irma? Than I am supposed to go with you!’, and then, slightly grumpy: ‘I need food’. Meet Marcell Shehwaro, a thirty-year old blogger and activist from Aleppo, the biggest city in Syria. She is visiting the Netherlands as a part of her trip to different European cities – the next stops are Brussels and Berlin. Her goal is to raise awareness about the wrong display of reality here in Europe – the message we receive (mainly through media) does not represent the true situation in Syria.

At the moment Marcell does not live in Aleppo – she had to leave just like hundreds of thousands of others. She now lives in Gaziantep, a city right across the Turkish border, since Aleppo has turned into a battlefield and ghost town from almost three years ago already. At first sight, there is nothing outstanding about Marcell – she is not afraid to make jokes the whole time, she laughs a lot, and she is very present and extravert. However, her personal story is one that will make the whole world around you stop for a while. To hear her talk about the things she has seen, her close ones that she has lost, and the mental problems she notices around her (including herself) is heartbreaking – and then think of all the personal stories of every Syrian citizen. But, since Marcell explicitly doesn’t want to focus on the negative and sad stories, I won’t either. She wants us, and herself, to remain hopeful and focus on the positive developments – only this will make us survive.

Marcell’s days in the Netherlands were filled with hearings, lectures and interviews – a lot of attention. She was invited as a guest at ‘Jihadis’ at CREA Café in Amsterdam, a student centre where a debate took place about the motivations of foreign ISIS fighters, and she gave a talk at ‘Checkpoint Cinema’ at the Humanity House in The Hague, this time about the lessons that could be learned from the fall of the Berlin wall in 1989 – to name a few. 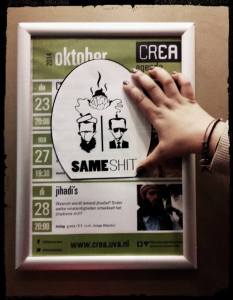 Al-Assad and ISIS: the #SameShit

Unfortunately for Marcell, she doesn’t like journalists, since ‘they always ask the same stupid questions, especially about ISIS and how bad they are, and I don’t want to talk about ISIS.’ Marcell states that the media has a huge role in framing the conflict in Syria: ‘ISIS is attractive and interesting, because all you see is a man with a beard and a big gun riding on a camel, with naked girls dancing around him. We, and especially the media, treat them as a popular hiphop group – we all give them the attention they want, which is making them bigger and giving them even more power.’ With all this attention for ISIS, Bashar Al-Assad – for many Syria citizens the biggest terrorist – stays at the background. Marcell wants everyone to be very aware of that – and she expects us to be. Unfortunately the questions she gets from the journalists show something else. Also during the debate at CREA Café the main topic was ISIS, and not in the way Marcell wanted it to be discussed. And what happens then? Right, she left – after making her point about the hiphop group of course. 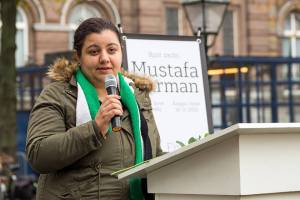 Next to hearings, debates and journalists we also organized a public memoriam ceremony together to commemorate the two-hundred-thousand victims in Syria, right in front of the Dutch parliament in The Hague. The ceremony was perfect – strong and modest at the same time. Marcell was one of the speakers – and her story was heartbreaking and full of hope again. Afterwards she told me it was good to know there are also many people in other countries who want to spread the same message, and support the Syrian citizens.

For the future, it is important to start focusing on creating a ‘normal’ life again, one without everyday danger and violence. Today’s strategy is destructive behaviour, making ISIS bigger, and using more  violence. We can create a normal life by focusing on the positive message, making Syrian civilians heroes instead of victims. Equal approach – especially in the media – is an essential part here. However, Shehwaro’s overall conclusion is that it is not about communication, but about the message that is sent. With focusing on the power of ISIS we give them their power, with focusing on the suffering of Syrian citizens we are creating only victims, and portraying only blond, light-skinned children is positive discrimination – too many realities.